Menu
Register as a visitor 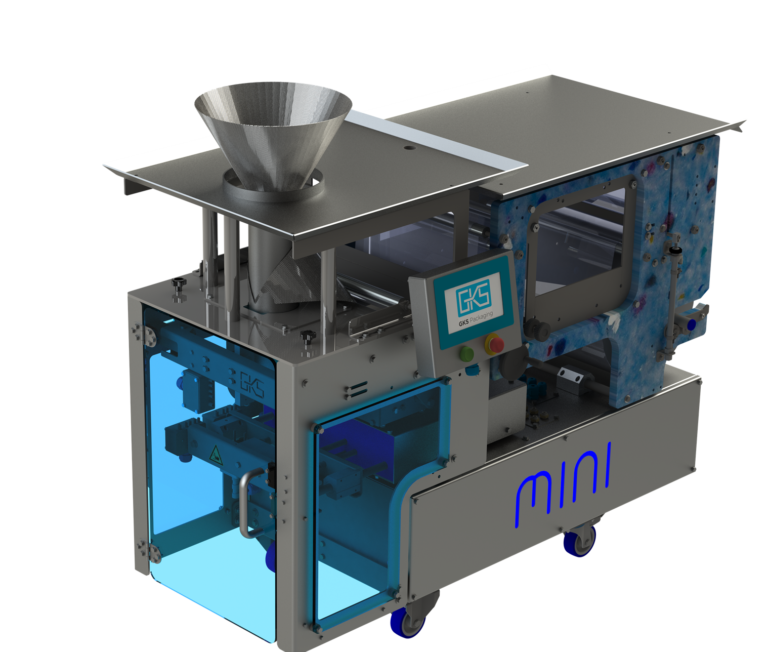 Since the introduction of the MP125 in 2009, which was succeeded by the MP150 in 2012, these small VFFS machines have been a great success for GKS Packaging. The MP125 was the first vertical form fill and seal machine with a machine volume of less than one cubic meter and has been successfully installed in countless applications worldwide.

In 2014 GKS introduced the unique fully modular construction method of its CP and UP packaging machine series. All well-known and proven advantages of this innovative modularity are now implemented into MINI, the successor to the MP150.

With MINI, GKS once again offers an extremely compact and competitive packaging machine, built according its inventive simplicity and characterized by a ‘frameless design’.

Despite its small dimensions, MINI is a ‘mature’ machine with a capacity of up to 65 packs per minute and a maximum bag width of 160mm.

MINI is equipped as standard with a heat sealing system for PP/laminate/paper-material, lateral film adjustment, a 7” full color touchscreen, end of film detection and servo controlled film transport. The design of this ‘frameless’ machine also takes into account the CO2 footprint and the environment. For example the side frames are made entirely of recycled ocean plastic.

Like all other GKS machines, MINI can be equipped with many options. Such as a sealing system for PE film, MAP packing, easy opening with pouring opening, block bottom mechanism, photocell for pre-printed film and thermal transfer printer.

Also several types of dosing systems can be placed above MINI, such as a weigher, pump or auger filler. Due to its low construction height, MINI is also very suitable for manual filling.

Applications for MINI are numerous, such as packing small portions of dressing and sauces, cheese, croutons or nuts.

The first MINI’s have recently been installed and the first production series are now rolling off the factory floor.

GKS Packaging is a family firm specialised in high-uptime, no-nonsense, cost-effective, flexible packaging solutions for all businesses with a focus on vertical form fill and seal machines. All machines are designed, produced and built in house in Eindhoven, The Netherlands. This is done by a team of skilled professionals with the utmost care and passion.

With over 1200 systems installed worldwide, GKS Packaging has become a leading player in the food industry. GKS Packaging has a one of a kind modular design across all machine platforms. Inventive simplicity, hygiene and user experience are what characterizes all GKS products.

Download the official press release. More information can be found on: www.gkspackaging.com